Risk of death from disease, including COVID, higher for overweight individuals.

In this politically correct age, health advocates are frequently censored for simply pointing out that being overweight is unhealthy.  But last week the British Medical Journal defied the popular “any size is healthy” crowd and published a report that found COVID-19 death rates were substantially higher among overweight populations.

In fact, the study found that death rates were ten times higher in countries where more than half of the adult population was classified as overweight.  The comprehensive report, generated by researchers at the World Obesity Federation, utilized mortality data from Johns Hopkins University and the WHO Global Health Observatory.

The report found that of the 2.5 million covid-19 deaths reported by the end of February 2021, 2.2 million were in countries where over half the population is classified as overweight—defined as a body mass index above 25.  Vietnam, for example, had the lowest death rate from covid-19 in the world (0.04 per 100,000) and the second lowest levels of population overweight at 18.3%. Conversely, the United Kingdom, with the third highest death rate globally (184 deaths per 100,000) had the fourth highest prevalence of overweight people at 63.7%.  The United States, with the next highest death rate at 152.49 deaths per 100,000, has 67.9% of the population overweight.

Supporting this study is separate research by the CDC that found 78% of COVID-19 patients hospitalized in the US overweight or obese. These findings were published in CDC’s Morbidity and Mortality Weekly Report published March 8.  This information is not widely reported due to the sensitive politics of “body image.” However, if politics can be set aside, it is difficult to ignore the glaring handicap that overweight people face when battling COVID.

Since the pandemic began, dozens of observational studies have reported worse outcomes for COVID-19 patients that are obese.  And these “observational” studies became more widely accepted fact clear back in August 2020 with the publication of a new meta-analysis. This extensive study, published in Obesity Reviews, found that people with obesity who contracted COVID-19 were 113% more likely than people of healthy weight to land in the hospital.

The analysis, which included a review of the data on a whopping 399,000 patients, also found that obese people were 74% more likely to be admitted to an ICU, and 48% more likely to die.  Of course, the negative health impact of a high BMI does not end with just COVID-19. According to the British Medical Journal: “Overweight populations are more susceptible to respiratory diseases generally. During the MERS and H1N1 influenza epidemics, for example, worse outcomes were linked to excess body weight.” 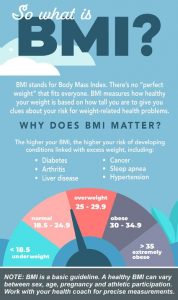 And long before the era of pandemics, excess weight was implicated in worse outcomes for just about every disease. WebMD links the following health conditions to obesity:

In connection with being more prone to disease, overweight and obese people can also expect a shorter lifespan.  According to statistics published in the Medscape database, modest amounts of excess weight can shorten one’s life by 1.5 years. Meanwhile, for severe obesity (BMI ≥40), life expectancy is reduced by as much as 20 years in men and by about 5 years in women.

With the mountains of evidence available, perhaps health authorities and medical professionals have the wrong focus. Instead of being overly concerned about offending the wrong group, perhaps it’s time to start warning consumers of the dangers that are inextricably linked to excess body weight.

If you have a desire to improve your overall health and shed a few pounds, please don’t hesitate to contact our office.  We’re committed to help you achieve “the best performance of your life!”